Free UK Postage
On All Books

Born on the edge of the Lake District in the small market town of Ulverston, Gordon was brought up visiting the lakes and fells. He now lives in Ambleside where he still goes walking, canoeing and sailing to relax, and rebuilds drystone walls in the Lakes Parish, often teaching others. 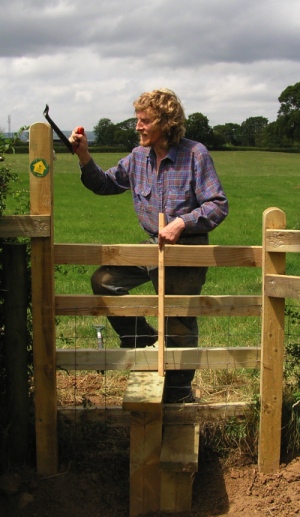 Gordon installing a stile on a Wrexham footpath

At 18 he became a secretary for the CHA keeping up to 80 people a week happy on guided walks in the highlands of Scotland. At 23 he worked in Taskforce North for the Lake District Planning Board where he soon became supervisor of the team doing ditching, walling and other footpath work. In the late 1980s he helped write walking guides for Clwyd CC in a Walks Around Wrexham series then was given the chance to republish Jack Baker's Walks in Clwyd, which he did by adding nature and historical interest in hand-written small booklets. Family Walks guides for Scarthin Books soon followed and also The Guide to the Maelor Way, also hand-written, following a long distance footpath along the Welsh borders on which he installed 60 stiles and signs voluntarily with help from an out-of-work landscape gardener.

Wrexham Maelor Borough employed him as their sole footpath contractor as did Groundwork Trust in Wrexham for several years until tendering came in and he became one of four contractors for the counties paths. Meanwhile some of the interesting history and curiosities of Clwyd (Wrexham, Denbighshire and Flintshire) came together in Curious Clwyd, hand-written, with black and white photos by Mike Penney. Then it was Chester's turn and after a year of research Curious Chester, Chester Inside Out and other Chester books were written.

Soon other authors in the same field asked Gordon to publish their books. Today with over 20 books and many booklets Gordon has finished contracting to Wrexham County. He has, over 27 years, erected around 1500 stiles and kissing gates in the county and strimmed over a hundred miles of paths including the heather tracks over Ruabon Mountain which can only be done in winter often in hail, rain and snow. In one community, (Overton) only 1 path was walkable when he arrived but with 150 stiles and kissing gates all the paths are open. However in 2013 Wrexham Council decided to tender all works to a single contractor and Gordon decided not to tender and take on more work but continued to monitor Wrexham paths as Chair of the Ramblers Association County Committee until he moved to Ambleside in 2019. In 2013 Gordon was employed to build the retaining wall for a memorial to Tony Drake MBE on the Cambrian Way. (Interestingly Tony had produced the British standard stile which Gordon thinks he improved on with a higher hand post in Wrexham.)

But you don’t have to walk to enjoy the various local history guides he publishes. Take a trip into Cheshire’s folklore with Roger Stephens, cruise the Chester Canal, find out about mills with Roy Wilding or see spectacular underground scenes with Cris Ebbs.

Thirty five years ago, Gordon moved to Coedpoeth, Wrexham, North Wales and bought 6 pathfinder OS 2 1/2" maps.He decided to walk all the footpaths in Wrexham. In 2018 he completed the last path. Well, why did it take so long, his son Justin only took 71 days to walk from John O'Groats to Land's End. Well he ended up clearing all the footpaths of obstructions, first he waymarked some then put in 200 stiles including the long distance path - The Maelor Way, then worked for Wrexham county as a footpath contractor, then after retirement continued to report path problems serving legal notices on the council, and even taking them to Magistrates Court. Oh and also made a path claim which ended up clarifying the law in the High Court and Appeal Court. Regina v Sec of State for Wales ex party Emery. This has helped other path claims countrywide. The last path he walked was obstructed in 7 places with fences and ditches with no pipes or bridges. The council should be clearing or have cleared these obstructions with gates and signposts.